The Morgan Hill Fire Department was established January 17, 1907, by ordinance #14 of the Morgan Hill City Council. The original department consisted of 15 members, a hand wagon, and a horse drawn engine.

By June the first fire station was built to house its first hose cart. In November 1908, a 36" fire bell was acquired, for a cost of $70.81. However, by February 1914, the use of this bell to signal curfews was discontinued due to firefighters mistaking its ringing for a fire alarm.

On December 1, 1920, the town purchased a Ford La France Type E combination chemical fire truck for the sum of $1,420. In 1926 the town passed a resolution that prohibited the city's fire trucks from leaving the city limits.

In 1929 the department was relocated to the southwest corner of Monterey Road and West Main Avenue along with the New City Hall and Police Headquarters.

In 1952 Morgan Hill Fire acquired its first dial in telephone service. The Morgan Hill Operator was on duty Monday through Friday 8:00 A.M. to 5:00 P.M. to answer emergency calls for the area. All after hour calls were transferred to San Jose. In 1965 the department purchased an alerting siren, now located on Nob Hill, for $1,200.

In 1968 dispatching services via Santa Clara County Communications were established. This continued until 1970 when dispatching was changed to California's Department of Forestry and Fire Protection.

On October 15th, 1974, the El Toro Fire Station moved location from 20 West Main Avenue to 18300 Old Monterey Road. Shortly after the old City Hall building that housed the Fire Department, City Hall, and the Police was demolished. The cost of the new station was $150,000.

In 1977, construction on Morgan Hill's second fire station, Dunne Hill, was started. The total cost of the station was $145,000. 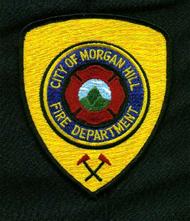